Pneu Service started out as a family business founded in 1946, and is now headed by the 3rd generation of men and women working for the success of the company. At the beginning, the company was no more than an ordinary garage which fixed mechanical problems and changed tyres, but even then Pneu Service stood out by manufacturing axles and wheels for agricultural vehicles.

With the rise of road transport, new challenges appeared. How could you make the most out of a set of HGV tyres, and what to do with all of the used tyres that were no longer useable? Tyre regrooving was a solution to both these problems. This is why Pneu Service launched their regrooving operations, creating an ergonomic aluminium handled tool in the 1950’s which has been slightly improved, but remains much the same as the first models.

At the beginning of the 1960’s, our tool was on the market and had already made a name for itself. What set it apart were the cutting-head, which over the years would be lightly modified, but still remain instantly recognisable. 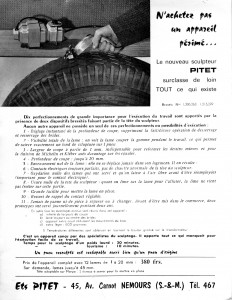 At this time, our regroover wasn’t very heavily promoted. Its designer, Mr Gabriel Pitet (1st generation) was a regular participant in inventor competitions and as such was more interested in research and perfection of new inventions, rather than promoting existing models. Only a few dozen units were produced per year.

Stepping into the company after gaining valuable business experience in a major French industrial group, Mr. Jean Paul Pitet (2nd generation) brought an entirely new management system to the company. This was the moment that our products rose to prominence, eventually being recognized and adopted by everybody in the industry, such as Michelin (who still call our tools “Pitets”) and a number of other major groups. This recognition put us on the road to success. Ever since, our regrooving tools have kept improving, adding new features such as electronic heat management, and becoming increasingly effective and comfortable for the user.

1980: The arrival of “double-sharpened” blades

The 1980’s saw the arrival of “double-sharpened” blades, mass-produced for “hand-designed” machines.

In 2000, Pneu Service sold off the automobile service activities in order to focus exclusively on “cutting and heating” equipment. We changed our name, becoming Pneu Service Outillage, then going under the acronym PSO.

This was the year when, following his degree in international business, Olivier Pitet (3rd generation) entered the company. With this arrival, the company was driven to maintain its level of excellence and offer products and services of the same quality as what had come before. And now we produce thousands of products and distribute them to clients on five continents.


Find out more about: